Development of new energy vehicles industry is a major national strategic topic in China. The process of new energy vehicles industry encounters many difficulties and bottlenecks, while only relying on self-running market cannot reach the ultimate goal of industrialization. Policies act as an lubricant between supply side and demand side, which provide guidance as well as firm supports for the development of the industry.
Many information could be revealed by analyzing thess policies. For example, from recently approved National Key R&D Projects (NKP), we can see that research interests were centered around high-energy density Li-ion battery but have gradually shifted to other areas such as energy storage and solid waste recycling. Major players’ technical strengths and their possible strateg could also be inferred from these approved project list. Apart from central policies that gave thorough guiding and instructions, local policies are found also greatly influence the strategic decisions of many companies.
For more infornation and details, please continue reading this article where we investigate and summarize policies from both central and local levels and try to understand the characteristics and hidden insights of these policies.
Part 1. Central Government

Figure 1 Overview of central government policies
Reference: Integral Report, Power Battery in China in 2019
Considering the stages on which these policies exert influence, they range from upstream manufacturing components of power batteries (here refer to materials that can be used to manufacturer battery, e.g. electrode material, electrolyte, separator, etc.), power battery manufacturing enterprises to the application as well as recycling and reusage of power battery products. From the perspective of policy types, they can be divided into three categories:
1) Planning and guidance policies
2) Regulating policies
3) Supporting policies
1) Planning and guidance policies
The main purpose of these policies is to plan and optimize resource allocation on macro-level. Since 2012, the central government has issued a series of guiding plans:
“New Energy Vehicles”is identified as key development area in these guidance documents and as important part of new energy vehicles, power battery has also drawn much attention. Technical routes around the performance of all aspects of the power battery have been formulated, such as the energy density, life span, cost, etc. of power battery.
2) Regulating policies
The main purpose of these policies is to regulate the market and products. For example, by formulating a series of related standards, power battery products are regulated in terms of size and safety performance. Another example, by promoting and revising subsidy policies, companies are incentivized to upgrade their technologies so as to obtain subsidies.
From 2015 to 2019, Chinese central government has launched and modified 4 times the subsidy policy, steadily decreased the subsidy amount. New measures call for a steady increase in the energy density requirement for NEV power battery systems and energy consumption requirement while raising the mileage threshold. 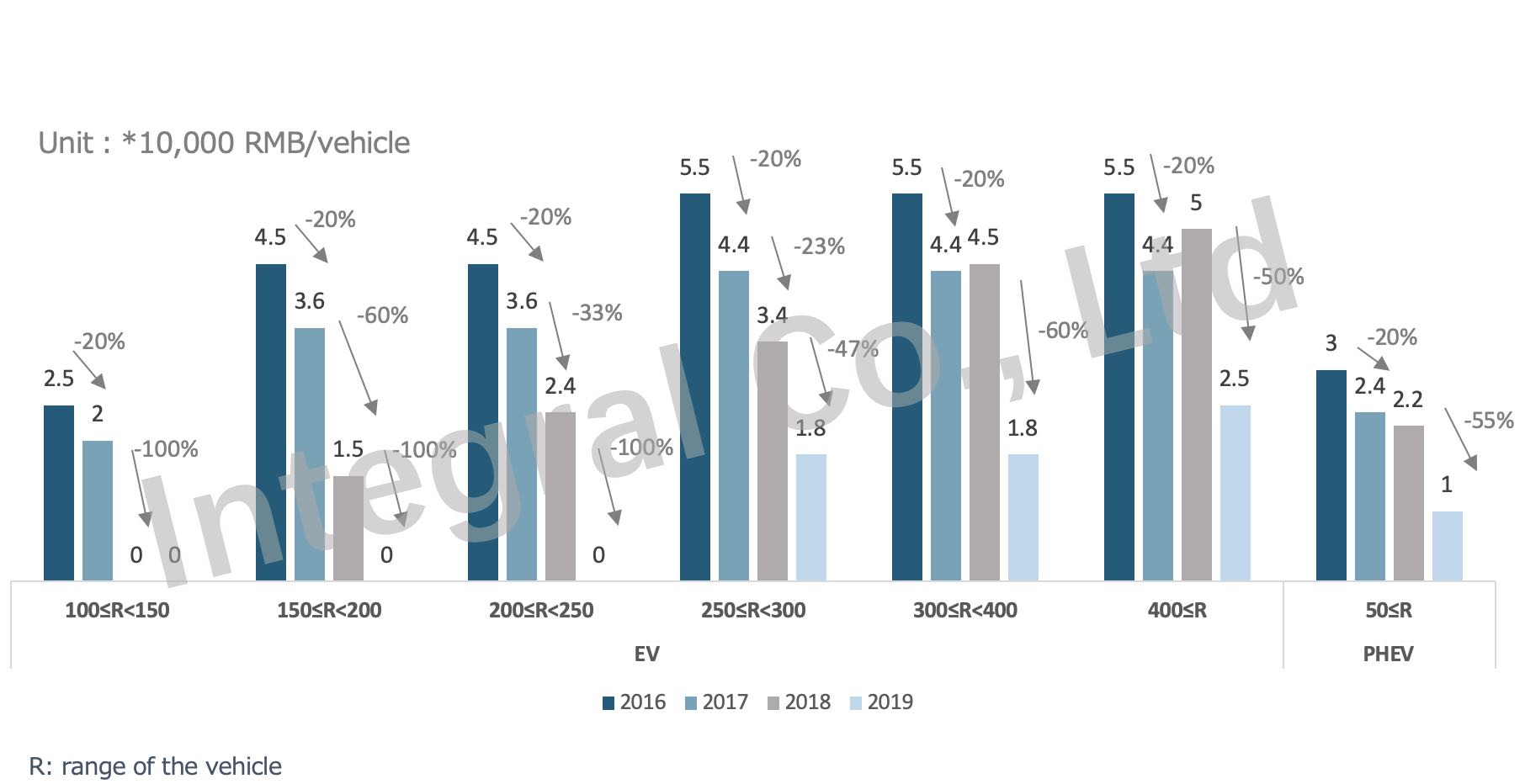 Figure 2 From 2016 to 2019: more and more strict subsidy policy (example for new energy passenger vehicles)
Reference: Integral Report, Power Battery in China in 2019
The decrease and even cut in NEV subsidies would reshape NEV industry and help promote the improvement of technological standards to global levels as domestic automakers have to make efforts to reduce their reliance on subsidies and totally focus on their products and technology for the market.
3) Supporting Policies
These policies are usually in forms of supporting actions, either monetarily or non-monetarily. By issuing supporting policies, the government aims to support the development of the power battery industry in various ways, such as National Key Research & Development Program (NKP), which support mainly in advanced basic research and Made in China 2025 program (MIC 2025), which mainly focuses on the manufacturing process.
Take NKP as an example, the objective of NKP is to support the advanced research and to develop innovative and enterprising talents for high-tech R&D and industrialization in different areas. The approval of applied projects represents the recognition of the R&D capability of selected companies. In addition, certain amount of funding will be provided to support carrying out these selected projects.

Figure 3 Recently approved NKP projects of major power battery players
Reference: Integral Report
Moreover, by analyzing the topics and the project content we can know more about major players’ technical strengths and their possible strategy. For example, since 2016, CATL, Lishen and Gotion are 3 companies that take proactive approach in the application of NKPs, which indicates their leading capability in advance R&D work.
Part 2. Local Government
Local policies differ from those in central government level in several aspects: 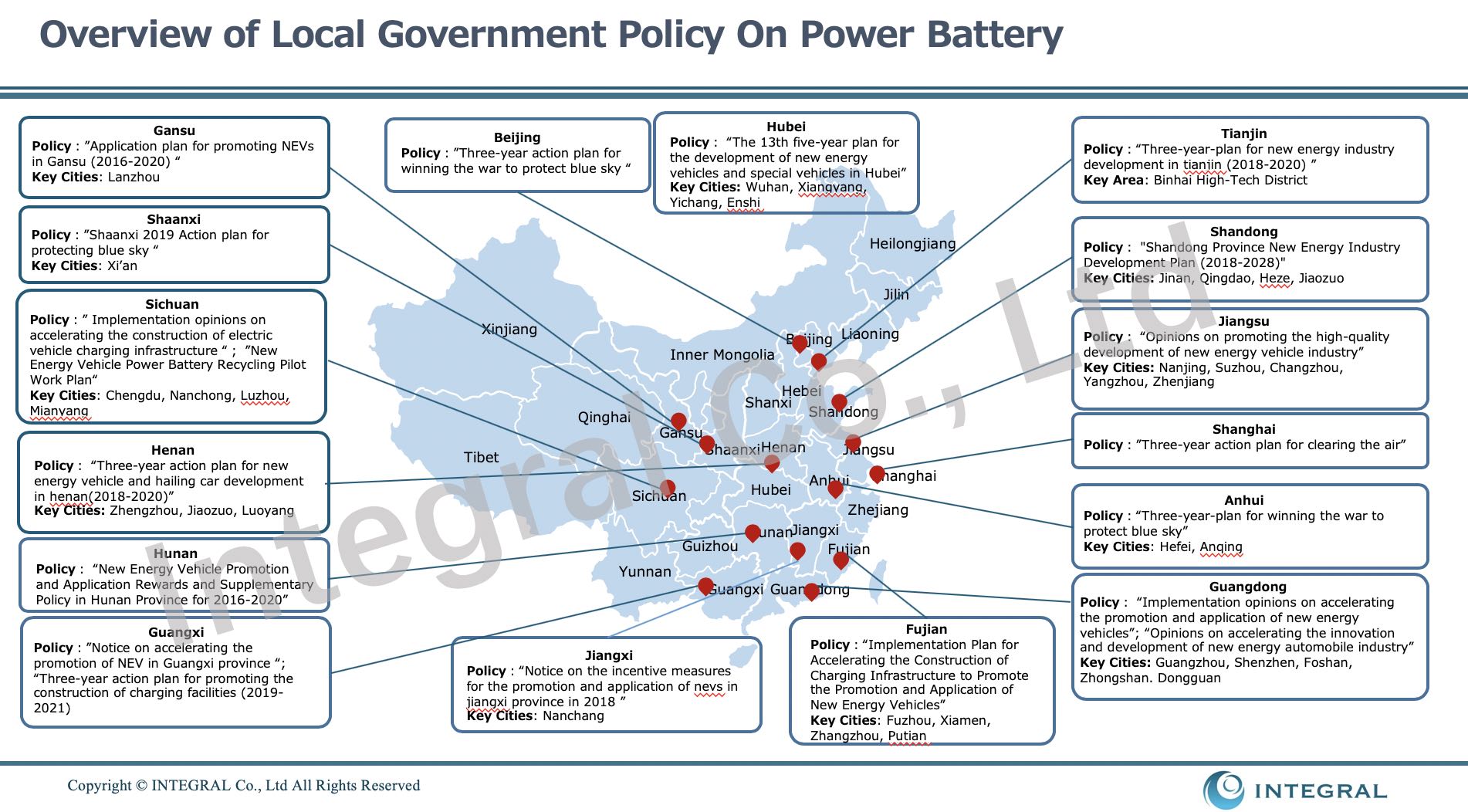 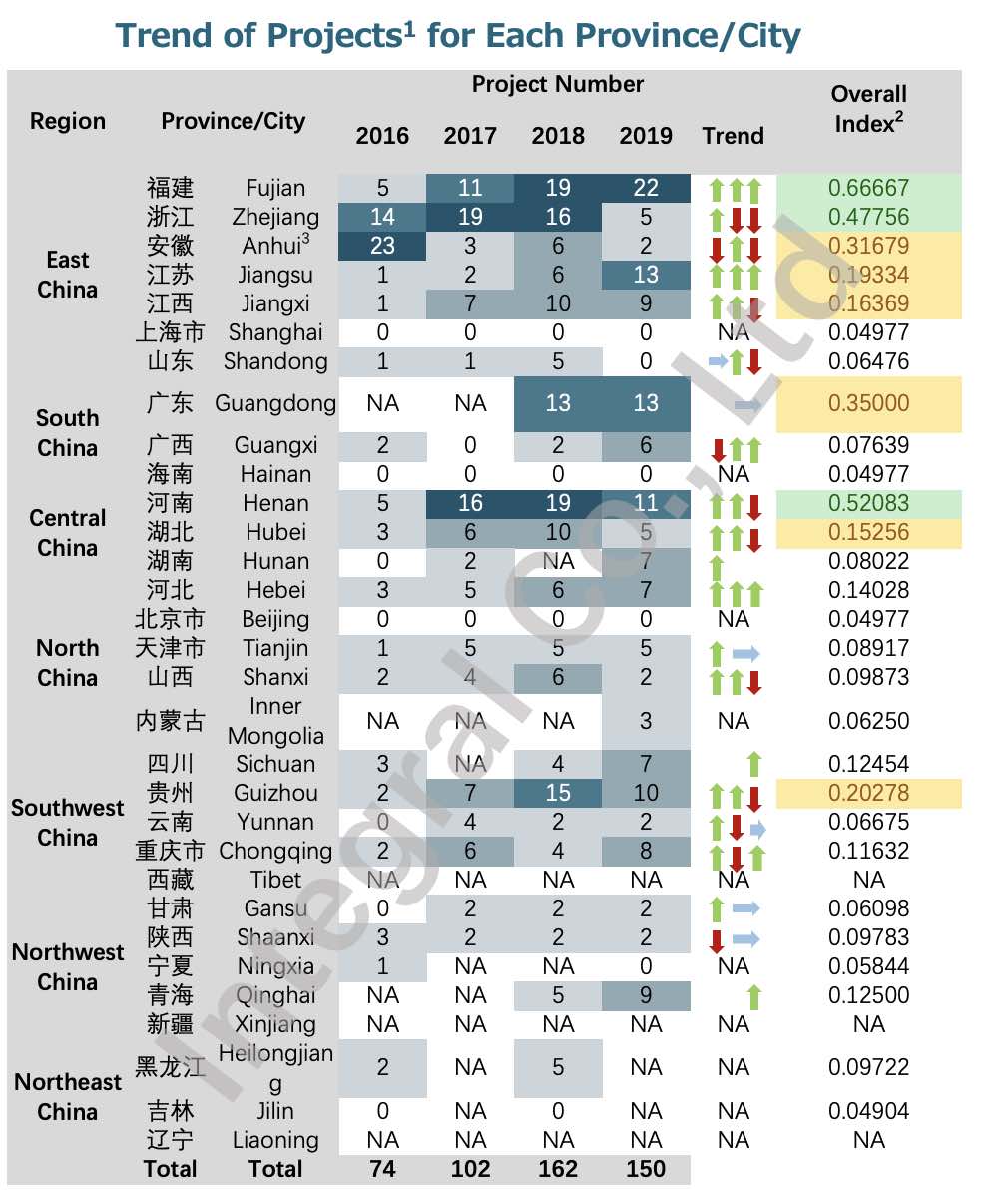 Figure 5 Trend of Projets for Each Province
Reference: Integral Report

However, as the budget and criteria for "key projects" in each provinces are different, the total number of "major projects" differ among provinces, which would affect the number of power battery-related projects.

The above two examples show clearly the commonalities and differences among provinces. According to central-released files, each province issued their own version, such as “ Three-year Action Plan for Winning the War to Protect Blue Sky ”, “ Notice on accelerating the promotion of NEV ”, etc. However, to which extent these provinces support the development of NEV varies. Overall, provinces with largest number of projects are concentrated in East China (Fujian, Zhejiang, Anhui, Jiangsu, Jiangxi) and South China (Guangdong), which might be owing to various reasons such as their abundant budget, larger number of NEV-related enterprises, etc. Meanwhile, it’s worth noting that as the cost of production increases in those areas, the industry begins to locate their business to the Midwest region, resulting in the emerging of regions such as Henan Province. This trend is reciprocal that enterprises are often influenced by local government policies when setting out strategies (such as capacity expansion plan, collaborated projects with government, etc.) and will tend to take benefit of these policies (such as tax benefits, subsidies, etc.).
To conclude, the policy guides the direction of NEV industry development and also regulates and supports the development of its sub-sector industries through some specific policies. While knowing these policies can inform us updated changes in the industry, detailed interpretation of policies also helps us to analyze companies’ development strategies.
May 22, 2020 Stefanie AO, Director, INTEGRAL
■ Click here for new membership registration.
( Member registration is free. After registration, you can view and download reports in our database)

The most popular articles

12345678910Next pagethe last page
We welcome your comments and questions regarding this article! Please fill in the comments below.
Click here to cancel reply.